In this article about using slideshows in wordpress I showed you how to embed slideshows in WordPress blog posts and sidebars using the Google Ajax Feed API.

I prefer to use this facility to pull in Image feeds from Flickr.

The problem with the images in these feeds is that they’re either too large or too small.

The MediaRSS specification has a <media:thumbnail> tag which lets you have a thumbnail image in your feed. That’s great, but the image size of the thumbnail is 75×75 pixels, which is useless for a nice looking slideshow. It ends up looking terribly blurry with no detail.

The Google Ajax Feeds API tries to get around this by letting you specify a “thumbnailTag” in the slideshow options object. Basically, you set this to “content” to tell the API to look for the image in the “content” section of the feed, rather than the <media:thumnail> section. This is also great, but the problem is that Flickr uses the LARGE (or even worse, ORIGINAL) image size in this section. So you get nice large detailed images in the feed, but they’re so large that they take ages to load, and your slideshow sits there for ages saying “Loading….” while it grabs the huge images and chews up your audiences bandwidth.

So I wrote a simple PHP screen scraping utility which grabs the Flickr feed, and changes the ImageUrl…_L.jpg to ImageUrl….M.jpg – in other words, it modifies the feed to include the medium size image rather than the large size.

Medium sized images are fine for slideshows, and they load quite quickly.

Just save this in a file named FlickrRSS.php in the top folder of your wordpress directory. Then instead of using your flickr RSS feed, pass the feed as a query parameter to the PHP utility.

So if your feed URL was this:
http://api.flickr.com/services/feeds/photos_public.gne?id=YourFlickrUserNumberlang=en-us&format=rss_200

This will change the <media:thumbnail> tag to point to the lager sized image, so your slideshows will load quickly, and look nicer 🙂 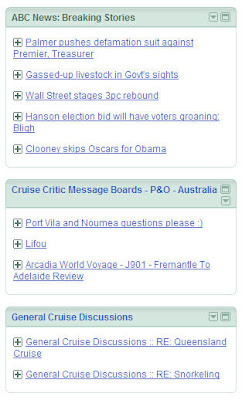 To the right you can see a screen shot of three RSS feeds as seen on my iGoogle page. Two of them are good, one of them is not so good. Can you tell the difference?

They’re all really specific in nature. The first one just shows breaking news as reported by the ABC. The second shows recent posts made be people about cruises in Australia via the CruiseCritic.com message boards, and the third shows new posts to the “General Cruise Discussions” section of the OzCruiseCritics message boards.

With the ABC feed, whenever there’s a new story, it appears at the top of the list, pushing older stories off the bottom of the list.

Same with the Cruise Critic feed (the 2nd one). As a new post is received on a particular subject, that subject goes to the top of the list, pushing older ones off the bottom.

The problem with the third feed (“General Cruise Discussions”) is three-fold:

1. The name of the feed doesn’t do OzCruiseCritics justice. Anyone casting a quick glance at the feed doesn’t know where it’s from. With the first two feeds on this example, it’s quite plain who’s supplying them, but not the third feed.

2. The discussion topics are not formatted properly. The name of the feed is repeated in each of the item descriptions. E.g. you see “General Cruise Discussions :: Re: Queensland Cruise” and “General Cruise Discussions :: Re Snorkelling”. This is redundant. We already know what feed the item is coming from by looking at the title of the feed. Each of these items should have a more concise description. In this case they should be “Queensland Cruise” and “Snorkelling”.

3. You can’t see it from the picture, but take my word for it, whenver someone replies to a topic on the OzCruiseCritics feed, it generates a new feed item. So if I was to reply to the “Snorkelling” discussion, the feed would end up looking like this:

I think that is crowded and difficult to read. What should really happen is that if an item is updated, it goes to the top of the list, and the old version of that item is removed from the list. So the feed should look like this:

These suggestions might seem pedantic, but the whole aim of RSS is to get your content read. Whish means the info needs to pack as much punch as possible, with as little clutter as possible. The reward for this is that your message gets out, more people hear what you say, and you get more traffic to your site.

I mentioned earlier that I’d modify ObSrv to be able to generate an RSS feed from any site that has images.

I didn’t realize it, but it already does this.

Just key in the search words, followed by site:yourdomain.com

For example, if you want a feed of all images of the planet Saturn from Nasa.gov, just type in:
Saturn site:nasa.gov

How cool is that?